shaping symmetry one child at a time

It is estimated that one in five children have some degree of head shape asymmetry, Plagiocephaly and Brachycephaly, also known as “flat head syndrome”. These asymmetry’s can be the result of a baby’s in utero positioning, torticollis (tightening of neck muscles), or even prolonged periods of time spent on their backs while sleeping due to the “Back to Sleep” campaign.  The 1992 “Back to Sleep” campaign has reduced Sudden Infant Death Syndrome (SIDS), by 40% but increased the incidence of cranial deformation by as much as 600%. Plagiocephaly is a unilateral flattening, flattening off to one side or the other, with possible ear shifting and other facial asymmetries.  Brachycephaly is less common and has an appearance of a wider or shorter head with a symmetrical flattening directly on the back of baby’s head.

If you notice flat areas on your baby’s head, we suggest that you talk with your pediatrician. If repositioning and “Tummy Time” does not help, your pediatrician or a craniofacial specialist can determine if your baby will benefit from a cranial remolding orthosis. 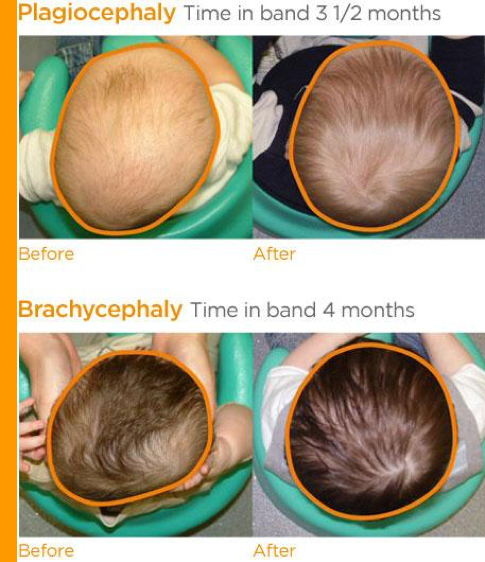 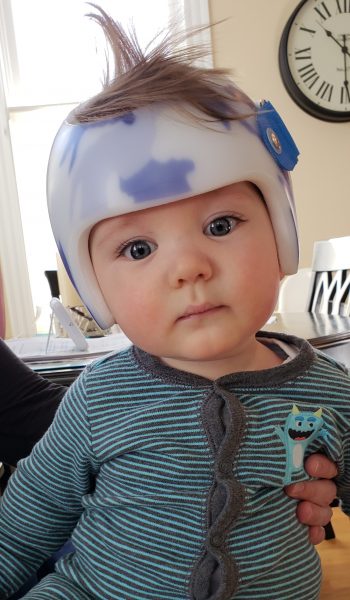 Craniosynostosis is another type of cranial deformation.  This happens when one or more cranial sutures close or fuse prematurely. Treatment of craniosynostosis usually requires surgical intervention. Craniosynostosis restricts growth at the involved suture and causes excessive growth perpendicular to the fused suture. Early referral to a specialist is always recommended. There are different types of craniosynostosis, including: sagittal, coronal, metopic, and lambdoid. Infants diagnosed with craniosynostosis usually require surgery and should be referred immediately to a pediatric neurosurgeon or craniofacial specialist for further evaluation and treatment. Early diagnosis is vital. Endoscopic surgeries are often recommended before three months of age.  Following an endoscopic surgery, a bivalve Cranial remolding orthosis will be fit within 1-2 weeks after surgery.  The child will wear this helmet 23 hours a day until he/she is one year old. During the course of treatment following surgery a second and possibly third helmet will be fit due to rapid growth of the cranium.

Cranial Kids treats infants with deformational plagiocephaly using STAR ® Cranial remolding orthoses from Orthomerica Products, Inc. These lightweight, custom-molded orthoses are manufactured under strict FDA guidelines, as required for Type II medical devices and have been used to successfully treat tens of thousands of infants with positional plagiocephaly. An infant fortunate enough to be fitted with a STARband in the optimum age range will wear the helmet 23 hours a day and will gently guide the infants head into a more normal shape.  The best age range is 4-8 months, this is when the cranium is growing most rapidly.  We can still begin treatment up to 12 months of age and treat until 18 months old.  Each infant is unique in every way, during the evaluation all circumstances will be considered and the orthotist can give you the best treatment plan possible.

Cranial remolding treatment is only effective if you have adequate control over the areas of bossing (bulging) and allow adequate room for growth in the flattened areas. That being said, it is paramount that the holding areas of the helmet match the exact anatomy of your child to prevent skin complications. Then we wait for the inevitable growth of the head to fill in the void of the custom made helmet.  Treatment with a STARband begins with the SmartSoc 3D Capturing System.This 3D system enables us to create a custom cranial remolding helmet that is accurate to 0.5mm, ensuring that your child gets the best possible clinical outcome.